Who's gonna play at Tenth???

All of this held on an Organic Historic Working Farm with kids areas, the biggest swing on the Island, farm animals, gardens, produce, fields and woods

We will have longer hours, new stages including an open mike stage on the back of a '24 Model T Truck!

Chris Smither If you like the blues, this artist is for you!

ASSOCIATED PRESS:  Wise words pour forth from Chris Smither – observations and aphorisms, similes and internal rhymes, run-on sentences and concise quips, all in a conversational flow. The careful construction of Smither’s lyrics is a thing of beauty and the bedrock of his bluesy folk music. Smither is an excellent acoustic guitarist and first-rate foot-stomper.

MAVERICK:  Cast your mind back to the first time you heard Hank Williams, Big Bill Broonzy or JJ Cale and remember how good it felt. Think of the opening encounter with Leon Redbone or Leo Kottke. They say newcomers to Chris Smither’s brand of country blues-tinged southern folk experience those same emotions. It’s true.

Quarter Horse has caught the attention of audiences nationwide with their complex harmonies and solid grooves rooted in the americana folk-rock tradition, they’ve earned the respect of music aficionados both young and old.  They are honing their craft and collectively moving to be one of the Northeast folk scene’s most revered talents.

Their fourth time playing Benner’s Farm, Quarter Horse is one of our favorites and surely a band not to be missed! 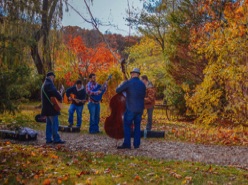 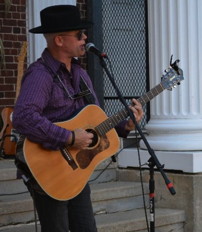 Since the end of 2014, Mick Hargreaves has been hard at work operating the Lantern Sound Recording Rig (LSRR) inside a sprawling hundred-year-old farmhouse located in the pine barrens of Long Island NY, where he records, rehearses, and holds house concerts. At the onset of the COVID-19 pandemic, Mick embarked on what he calls "the last, or maybe next to last, final remodeling" of the Lantern Sound Recording Rig. Every room in the recording facility was re-thought, re-imagined, re-engineered, and re-built.

Mick and the LSRR have hosted stages and/or done production for the Montauk Music Festival, Cabin Fever Music Festival, The Dorene Rose Arts Stage at both Alive On 25 (Riverhead NY) and Alive After Five (Patchogue NY), and the LSRR will do the acoustic stage production for the upcoming "Pine Barrens Jam 2021" music festival (Center Moriches NY) on September 18th, 2021.

2016 saw the appearance of the song "Rinse and Repeat", a co-write with Rich Arfin and Klyph Black, in the NETFLIX Judd Apatow series “Love”. In 2012, a vocal and piano recording of "Crystal Ball" (Joe Delia on piano, MH singing), appeared in the film "Art=(Love)2", and in 2013, instrumental versions of Mick's recordings of "Hometown" and "Bridget" (written by Gary Jude Anderson) appeared in the Long Island Surfing documentary film "A Hundred Miles To The End". In 2009, the song "Haunted" (as recorded with The Grip Weeds) appeared in the film "Blood River.”

Mick was a founding member of the New York Roots Music Association (NYRMA), and he proudly wears alumni garb from these outfits: The Dixie Bee-Liners, The Hangdogs, Los Blaggards, The Ghost Rockets, The Grip Weeds, The Tonebenders (NYC), Gene Casey & The Lone Sharks, and Caroline Doctorow. 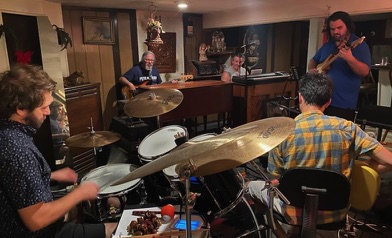 Travis McKeveny is a Long Island-based singer-songwriter. His debut album, Last Year's Leaves (2012), met with critical acclaim, garnering him comparisons to John Prine and Tom Waits. McKeveny's sophomore effort, October Porches and Second Hand Fears (2015) - produced by The Infamous Stringdusters' Andy Falco - was a major leap forward, sonically and lyrically. McKeveny again joined forces with Falco to write "1901: A Canyon Odyssey," which appeared on the Stringdusters' Grammy-winning album Laws of Gravity (2017). McKeveny has opened for such nationally touring acts as Todd Sheaffer (of Railroad Earth) and Chuck Prophet. He plans to continue writing, singing, and playing "till the wheels fall off," and not a minute sooner.

Songs from the Black Book

CB (Claudia) Jacobs, has been a fixture on the North East music scene, sharing her soulful and bluesy, self-reflective and uplifting songs; performing solo, with her band and many guest collaborators.   This year, she is embarking on a long considered personal project.  As a child she was surrounded by music, both of her parents creatives, but it was her father’s often full- throated enthusiasm and stories of 50’s Greenwich Village (sitting feet away from Leadbelly, Woody Guthrie, Pete Seeger…) that instilled her passion for traditional music, its history and the varied way it could be interpreted and shared.  It was during that NYC time that he began a passion project by keeping a log of the songs that he heard at the hootenannies and music venues and lyrics found in publications, in a small leather-bound binder.   Over the years Claudia has shared the stage with many performers directly out of that tradition and tradition inspired including Richie Havens,  Susan Werner, Stebe Forbert, Judy Collins, The Kingston Trio, and plans to release her own interpretative commemoration of this soulful, international music next year.  www.claudiajacobs.com

Dr. Dan has been playing with Claudia for many years adding his keyboard skills and distinctive voice to her vocals. 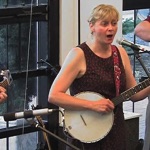 Maria is one of those rare performers who really inhabits the stage. She is a splendid instrumentalist — in particular she is a virtuoso clawhammer banjo player and a great singer. Authentic Quebecois songs and old time banjo music are tied together by Maria's sly and engaging wit. Her unique ability to make traditional material feel contemporary and accessible along with her sparkling stage presence makes Maria's performances a compelling and memorable experience. Portland Folklore Society

Principal songwriter, singer, guitarist and cellist for one of Long Island’s most intriguing and popular bands, Miles To Dayton, Jonathan Preddice’s new project is a collection of original Americana songs under his own name, breaking the boundaries between rock, folk, pop and classical. Many of these songs were written during quarantine as a response to these turbulent times, and he will be recording the songs very soon with a cast of characters from Long Island/NYC. For Fiddle and Folk, Jon will be playing acoustic guitar, tenor guitar, cello and vocals, and will be joined by Brian Chabza on fiddle.

Bob Westcott: will emcee and entertain between sets with stories and song.